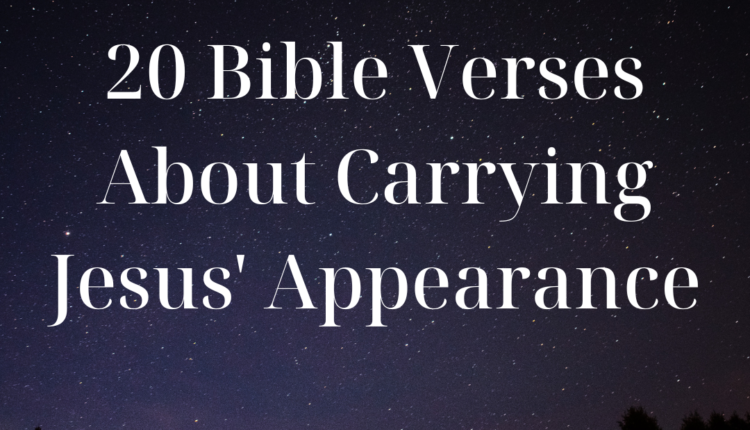 Today we will be dealing with 20 Bible verses about carrying Jesus’ appearance.

Mark.5.8 For Jesus had already said to the spirit, “Come out of the man, you evil spirit.”

The evil spirit in the life of the gerasene man recognised Jesus from afar and he began to tremble. No wonder the scripture records that At the mention of the name of Jesus, Every knee shall bow and tongues shall confess that Jesus is Lord It is not only mentioning the name of Jesus that perform wonders but also his appearance.

We children of God should carry the appearance of Christ to the extent that evil spirits recognises us from afar. It is important that Jesus is indeed present and evident in your life for you to scare evil spirits. We should always pray that Father, let your presence be evident in my life, let every evil spirit flee when they see me.

Who has believed what he has heard from us? And to whom has the arm of the Lord been revealed? For he grew up before him like a young plant, and like a root out of dry ground; he had no form or majesty that we should look at him, and no beauty that we should desire him. He was despised and rejected by men; a man of sorrows, and acquainted with grief; and as one from whom men hide their faces he was despised, and we esteemed him not. Surely he has borne our griefs and carried our sorrows; yet we esteemed him stricken, smitten by God, and afflicted. But he was wounded for our transgressions; he was crushed for our iniquities; upon him was the chastisement that brought us peace, and with his stripes we are healed.

As many were astonished at you— his appearance was so marred, beyond human semblance, and his form beyond that of the children of mankind.

I lifted up my eyes and looked, and behold, a man clothed in linen, with a belt of fine gold from Uphaz around his waist. His body was like beryl, his face like the appearance of lightning, his eyes like flaming torches, his arms and legs like the gleam of burnished bronze, and the sound of his words like the sound of a multitude.

So God created man in his own image, in the image of God he created him; male and female he created them.

The revelation of Jesus Christ, which God gave him to show to his servants the things that must soon take place. He made it known by sending his angel to his servant John.

Then God said, “Let us make man in our image, after our likeness. And let them have dominion over the fish of the sea and over the birds of the heavens and over the livestock and over all the earth and over every creeping thing that creeps on the earth.

But on the first day of the week, at early dawn, they went to the tomb, taking the spices they had prepared. And they found the stone rolled away from the tomb, but when they went in they did not find the body of the Lord Jesus. While they were perplexed about this, behold, two men stood by them in dazzling apparel. And as they were frightened and bowed their faces to the ground, the men said to them, “Why do you seek the living among the dead?

But in your hearts honor Christ the Lord as holy, always being prepared to make a defense to anyone who asks you for a reason for the hope that is in you; yet do it with gentleness and respect.

Now on the first day of the week Mary Magdalene came to the tomb early, while it was still dark, and saw that the stone had been taken away from the tomb. So she ran and went to Simon Peter and the other disciple, the one whom Jesus loved, and said to them, “They have taken the Lord out of the tomb, and we do not know where they have laid him.” So Peter went out with the other disciple, and they were going toward the tomb. Both of them were running together, but the other disciple outran Peter and reached the tomb first. And stooping to look in, he saw the linen cloths lying there, but he did not go in.

Beloved, we are God’s children now, and what we will be has not yet appeared; but we know that when he appears we shall be like him, because we shall see him as he is.

For the word of God is living and active, sharper than any two-edged sword, piercing to the division of soul and of spirit, of joints and of marrow, and discerning the thoughts and intentions of the heart.

And from those who seemed to be influential (what they were makes no difference to me; God shows no partiality)—those, I say, who seemed influential added nothing to me.

On his robe and on his thigh he has a name written, King of kings and Lord of lords.

His eyes are like a flame of fire, and on his head are many diadems, and he has a name written that no one knows but himself.

Behold, he is coming with the clouds, and every eye will see him, even those who pierced him, and all tribes of the earth will wail on account of him. Even so. Amen.