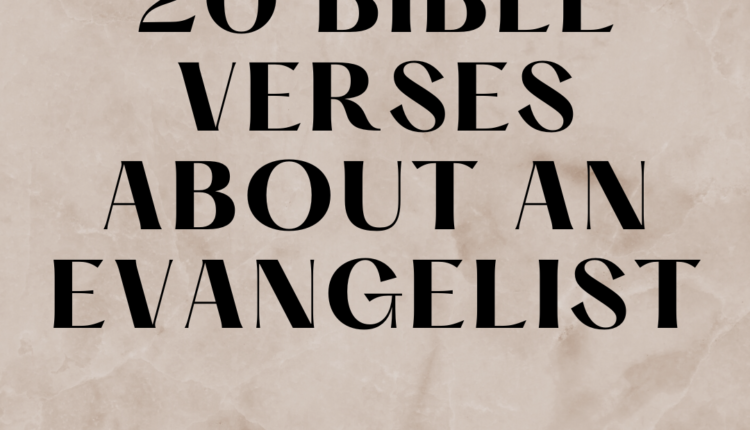 Today, we will be dealing with 20 Bible verses about an Evangelist.

LUKE 15:1-2 Then drew near unto him all the publicans and sinners for to hear him. And the Pharisees and scribes murmured, saying, This man receiveth sinners, and eateth with them.

We see that there is a desire in the publicans and sinners to be where Jesus was and also to hear Him talk. And the Pharisees not pleased with the action murmured. The lost or sinners were not around Jesus to remain as such,we even see that Jesus had a close relationship with them to the point of eating with them (you don’t eat with someone you are not acquainted with). Jesus came for those that are lost and sick, so that they will be saved.

The murmurings of the pharisees didn’t stop Him from doing salvation works. People (especially those whose salvation is still shaking) will always talk when they see you mingle with sinners.

Let them talk but do not remove your gaze from that which the Lord has instructed you to do,which is going into the world to PREACH the GOSPEL. You are saved to save others. Do the work of an Evangelist. PRAYER: I receive unfailing help to recruit more people to Your kingdom Lord Jesus.

For with the heart one believes and is justified, and with the mouth one confesses and is saved. For the Scripture says, “Everyone who believes in him will not be put to shame.” For there is no distinction between Jew and Greek; for the same Lord is Lord of all, bestowing his riches on all who call on him. For “everyone who calls on the name of the Lord will be saved.” How then will they call on him in whom they have not believed? And how are they to believe in him of whom they have never heard? And how are they to hear without someone preaching?

But you will receive power when the Holy Spirit has come upon you, and you will be my witnesses in Jerusalem and in all Judea and Samaria, and to the end of the earth.

And he said to them, “Go into all the world and proclaim the gospel to the whole creation. Whoever believes and is baptized will be saved, but whoever does not believe will be condemned.

Continue steadfastly in prayer, being watchful in it with thanksgiving. At the same time, pray also for us, that God may open to us a door for the word, to declare the mystery of Christ, on account of which I am in prison— that I may make it clear, which is how I ought to speak. Walk in wisdom toward outsiders, making the best use of the time. Let your speech always be gracious, seasoned with salt, so that you may know how you ought to answer each person.

For Christ did not send me to baptize but to preach the gospel, and not with words of eloquent wisdom, lest the cross of Christ be emptied of its power.

Afterward he appeared to the eleven themselves as they were reclining at table, and he rebuked them for their unbelief and hardness of heart, because they had not believed those who saw him after he had risen.

On the evening of that day, the first day of the week, the doors being locked where the disciples were for fear of the Jews, Jesus came and stood among them and said to them, “Peace be with you.” When he had said this, he showed them his hands and his side. Then the disciples were glad when they saw the Lord. Jesus said to them again, “Peace be with you. As the Father has sent me, even so I am sending you.” And when he had said this, he breathed on them and said to them, “Receive the Holy Spirit. If you forgive the sins of any, they are forgiven them; if you withhold forgiveness from any, it is withheld.

Be imitators of me, as I am of Christ. Now I commend you because you remember me in everything and maintain the traditions even as I delivered them to you.

But to all who did receive him, who believed in his name, he gave the right to become children of God.

And you will say in that day: “Give thanks to the Lord, call upon his name, make known his deeds among the peoples, proclaim that his name is exalted.

But for me it is good to be near God; I have made the Lord God my refuge, that I may tell of all your works.

I am under obligation both to Greeks and to barbarians, both to the wise and to the foolish. So I am eager to preach the gospel to you also who are in Rome.

On the next day we departed and came to Caesarea, and we entered the house of Philip the evangelist, who was one of the seven, and stayed with him.

For so the Lord has commanded us, saying, “‘I have made you a light for the Gentiles, that you may bring salvation to the ends of the earth.