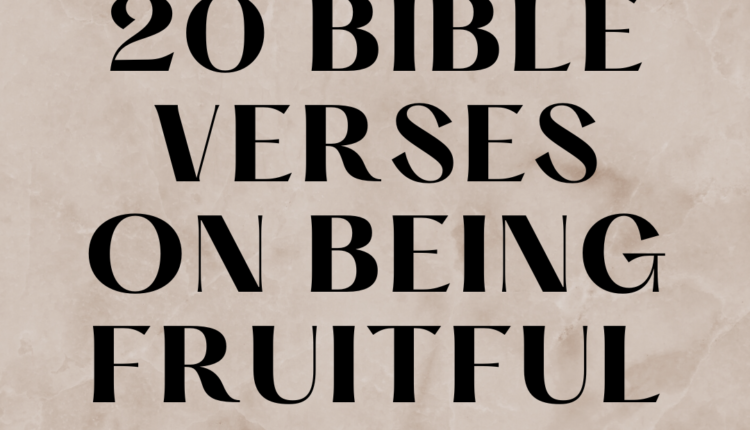 Today, we will be dealing with 20 Bible verses on being Fruitful.

Luke.13.6 – He spake also this parable; A certain man had a fig tree planted in his vineyard; and he came and sought fruit thereon, and found none.
Luke.13.7 – Then said he unto the dresser of his vineyard, Behold, these three years I come seeking fruit on this fig tree, and find none: cut it down; why cumbereth it the ground?

Jesus desires that we don’t just be around him, go to church for years, claim to be Christians yet no intimacy with Him. He desires that we come to the point of bearing fruits and not just occupy space. I must abide (be intimate) in Him (Jesus), and He in Me, because there in lies my relevance.

Pray that dear Father, help me to always abide in you so much that I always make you proud. 20 Bible verses have been collected in today’s topic on how to be fruitful according to God’s will.

And God blessed them. And God said to them, “Be fruitful and multiply and fill the earth and subdue it and have dominion over the fish of the sea and over the birds of the heavens and over every living thing that moves on the earth.”

You did not choose me, but I chose you and appointed you that you should go and bear fruit and that your fruit should abide, so that whatever you ask the Father in my name, he may give it to you.

“Blessed is the man who trusts in the Lord, whose trust is the Lord. He is like a tree planted by water, that sends out its roots by the stream, and does not fear when heat comes, for its leaves remain green, and is not anxious in the year of drought, for it does not cease to bear fruit.”

Blessed is the man who walks not in the counsel of the wicked, nor stands in the way of sinners, nor sits in the seat of scoffers; but his delight is in the law of the Lord, and on his law he meditates day and night. He is like a tree planted by streams of water that yields its fruit in its season, and its leaf does not wither. In all that he does, he prospers. The wicked are not so, but are like chaff that the wind drives away. Therefore the wicked will not stand in the judgment, nor sinners in the congregation of the righteous.

Then God said, “Let us make man in our image, after our likeness. And let them have dominion over the fish of the sea and over the birds of the heavens and over the livestock and over all the earth and over every creeping thing that creeps on the earth.”

To the choirmaster. A Psalm of David. The heavens declare the glory of God, and the sky above proclaims his handiwork. Day to day pours out speech, and night to night reveals knowledge. There is no speech, nor are there words, whose voice is not heard. Their voice goes out through all the earth, and their words to the end of the world. In them he has set a tent for the sun, which comes out like a bridegroom leaving his chamber, and, like a strong man, runs its course with joy.

All Scripture is breathed out by God and profitable for teaching, for reproof, for correction, and for training in righteousness, that the man of God may be competent, equipped for every good work.

“For no good tree bears bad fruit, nor again does a bad tree bear good fruit, for each tree is known by its own fruit. For figs are not gathered from thornbushes, nor are grapes picked from a bramble bush. The good person out of the good treasure of his heart produces good, and the evil person out of his evil treasure produces evil, for out of the abundance of the heart his mouth speaks.

For his invisible attributes, namely, his eternal power and divine nature, have been clearly perceived, ever since the creation of the world, in the things that have been made. So they are without excuse.

For thus says the Lord, who created the heavens (he is God!), who formed the earth and made it (he established it; he did not create it empty, he formed it to be inhabited!): “I am the Lord, and there is no other.

Woe to those who decree iniquitous decrees, and the writers who keep writing oppression, to turn aside the needy from justice and to rob the poor of my people of their right, that widows may be their spoil, and that they may make the fatherless their prey! What will you do on the day of punishment, in the ruin that will come from afar? To whom will you flee for help, and where will you leave your wealth? Nothing remains but to crouch among the prisoners or fall among the slain. For all this his anger has not turned away, and his hand is stretched out still. Ah, Assyria, the rod of my anger; the staff in their hands is my fury!

Behold, children are a heritage from the Lord, the fruit of the womb a reward. Like arrows in the hand of a warrior are the children of one’s youth. Blessed is the man who fills his quiver with them! He shall not be put to shame when he speaks with his enemies in the gate.

He was foreknown before the foundation of the world but was made manifest in the last times for the sake of you.

In the abundance of your trade you were filled with violence in your midst, and you sinned; so I cast you as a profane thing from the mountain of God, and I destroyed you, O guardian cherub, from the midst of the stones of fire.

Every moving thing that lives shall be food for you. And as I gave you the green plants, I give you everything.

These are the generations of Noah. Noah was a righteous man, blameless in his generation. Noah walked with God.